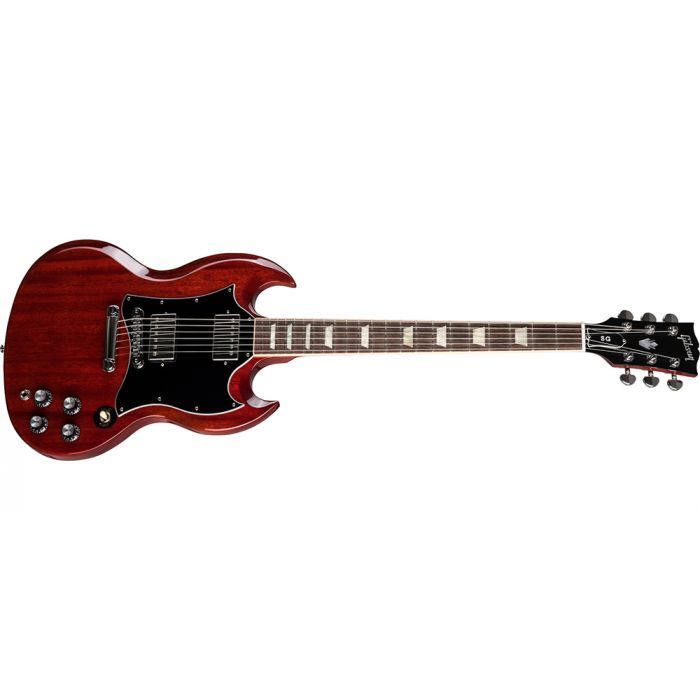 Code:
SGS00HCCH1
Be the first to review this product
Smashed by Townshend, schooled by May, and regularly taken for a duck-walk by Young; the Gibson SG has seen some crazy days...
In stock
Availability: ✓ 1 in stock
£1,489.00
Add to Wish List
Email
Trustpilot
Free Delivery

The Gibson SG Standard is the ultimate rock guitar. Having been in constant circulation since its release in 1961, it's no surprise that this guitar ranks highly in nearly every ‘most popular’ or ‘greatest’ poll of guitars you’ll ever come across.

Built more like a piece of artillery than a guitar, the SG Standard is armed to the hilt with solid features that recreate the amazing rock tone and infamous playability that have produced some of the finest rock and roll performances in history. It's lightweight mahogany slab body features the infamous SG ‘double-horned’ cut-away shape and has a natural proclivity to produce harmonic feedback if required, another useful feature that makes this the ideal rock guitar.

A sleek Rosewood fretboard sits atop of a smooth action slim profile Maple neck, and features 22 medium jumbo frets that are easily accessible beyond the 12th thanks to the body's cutaway heel, and have been optimised using Plek Pro’s brilliant fret levelling technology. This ‘plekking’ process grades and levels each individual fret to ensure that any buzz is eliminated and every individual note played sings loud and clear, with unparalleled sustain.

This great tonewood combo is protected and cosmetically enhanced with a coating of Gloss Nitrocellulose Lacquer that makes the deep Heritage Cherry stain almost glow. This period-correct finish also allows the wood to breathe and flourish.

Let's talk about sound. This Gibson SG Standard is the ultimate rawker and brandishes a pair of 490 humbuckers that produce a monstrous tone that only Gibson could tame and focus. Gibson has done a fantastic job of re-voicing these pickups to produce the incendiary PAF humbucking tone of the original, but have pushed the upper mids to hone the sound for contemporary amplification. These pickups do an amazing job of translating the SG’s classic tone and producing a brilliant variety of sounds from full-bodied jangle, to bowel-movement-inducing growls, to biting, bone splitting crunch - but whatever the sound you prefer, it will be the brilliant, instantly recognisable and unmistakable sound of a Gibson SG.