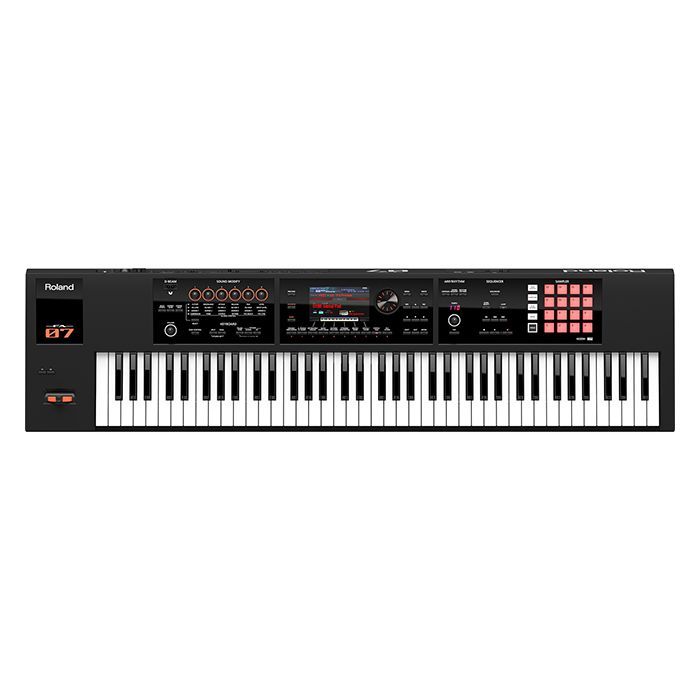 The Roland FA-07 Music Workstation is the latest addition to the FA Music workstation series from Roland. This brand new model bridges the gap between the FA-06 and the FA-08 models. The 76-note velocity-sensitive keybed features semi-weighted keys for exceptional playability, ideal for everyone from synth and keyboard players to classical pianists. Not only is the FA-07 an amazing stage and studio keyboard but it also includes a powerful workstation at its heart. The centre-console display includes a toggle wheel for scrolling through soundbanks, presets and editing parameters. Its streamlined, ergonomic layout and ultra-fast workflow delivers maximum versatility for a wide selection of musicians.

Roland have incorporated the same sound bank and features from the other FA models, keeping the huge library of rich and diverse sounds. In total, the FA-07 includes 2000 tones borrowed from the Roland INTEGRA-7, offering a comprehensive palette of premium-grade sounds for any musical style. Also included are INTEGRA-7's SuperNATURAL synth and XV-5080 PCM tones, as well as a diverse collection of expressive SuperNATURAL acoustic tones including piano, organ, bass strings and more. You can even add more tones using the internal wave sound expansion slots for optimal versatility.

One of the most unique features of the Roland FA-07 is the integrated 16-track sequencer and versatile sample section. The intuitive 16-track sequencer is specially-designed to capture your creativity as it happens. The sequencer gives you the ability to build a full arrangement with the instrument's huge array of sound. You can even record continuously using the loop mode, allowing you to fill up all 16 tracks without having to stop. Real-time capture and stereo recording are also included, giving you complete control over all your sounds and tracks.

The Version 2.0 system update includes a select range of enhancements and upgrades designed for performing players. One of the most prominent new features is the Tone Remain function, which gives you the ability to switch sounds seamlessly, with note effect tails or notes cut off unnaturally. The new master control function allows you to assign and send out a variety of MIDI messages, reconfiguring the FA and external devices with a single command.

With onboard templates for Logic, Cubase and Sonar, the FA-07 will fit right into your existing DAW setup, eliminating the need to spend time learning another workflow. With the touch of a button you can instantly configure the workstation for use with your DAW via USB, thanks to the streamlined interface with a large colour LCD screen. D-Beam, Rhythm Pattern, Arpeggiator and Chord Memory functions are all available tools to expand your creative palette.