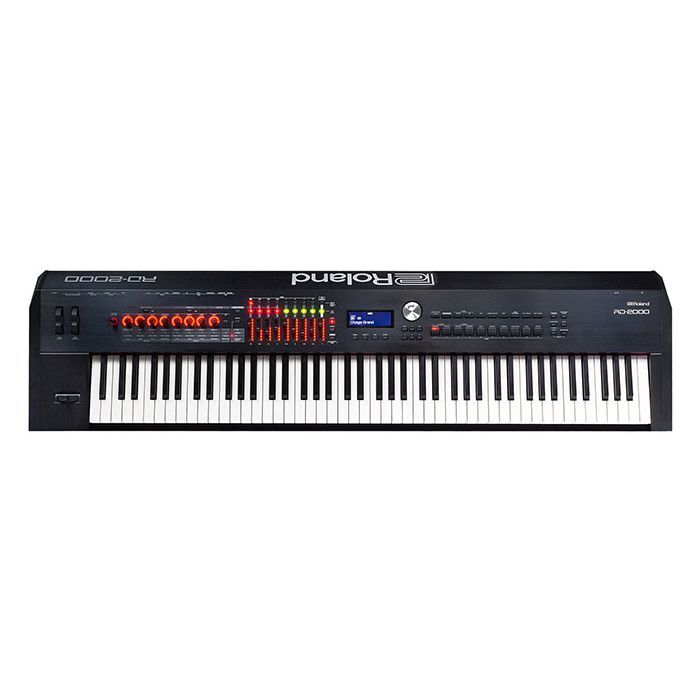 Code:
RD2000
Be the first to review this product
The RD-2000 really is the cream of the crop when it comes to digital pianos and it presents the very best technology that industry leading brand Roland has to offer.
This item is currently out of stock. You can place a pre-order and we will contact you with an ETA.
Availability: ✕ Out Of Stock
£1,794.00
Add to Wish List
Email
Trustpilot
Free Delivery

It's an exciting time for professional standard keyboard players everywhere, as Rolands latest release for 2017 has not only pushed boundaries of what can be expected from a digital piano, but has raised the bar to previously unheard of levels for digital technology.

Not only renowned for it's sensational playability and outstanding authentic feel, it's a world beater in terms of functionality, and comes complete with more sounds than you could dream up.

Equipped with the most powerful dual sound engines on the planet which powers this 88-Key digital piano and puts it amongst the highest spec digital keyboards on the planet.

The first sound engine is dedicated purely for acoustic effect purposes and utilises Roland's V-Piano technology in order to provide ultra-realistic response aswell as rich, detailed sounds from a selection of the most desirable acoustic pianos on the planet, from grand to honky-tonk - you won't be short of impressive piano sounds here.

On top of this, the second sound engine uses the world famous SuperNATURAL technology and is loaded full of the highest quality range of sounds encompassing everything from classic e-pianos of the past (70s, 80s etc.) aswell as a whole host of additional sounds.

Between the 2 soundbanks, you'll find a mind boggling 1100 non-piano sounds, including organs, strings, brass, synths, and much, much more.

When you realise how functional the Roland RD-2000 is, you might start to think of it as the Swiss-Army Knife of Digital Pianos. Every aspect of the keyboard is fully customisable. From tweaking each individual on-board tone with the sliders and tone knobs, to mapping your keyboard for up to 8-zones of sound at once - it's a truly remarkable tool for any serious musician and opens the door to previously unheard of levels of creativity - allowing you to produce some seriously outstanding sound in a live setting.

Specification
Reviews
Write Your Own Review